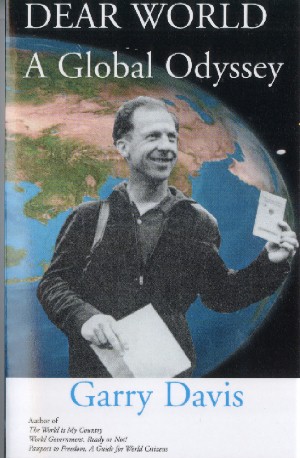 is a rollicking and remarkable global panorama of one man's continuing personal crusade to "live" One World and One Humanity. Besides being a sweeping critique of nationalism, it is a practical guide for anyone interested in world peace through law, the freedom to travel, and human rights.

The main locale is Japan where World Citizen Davis landed while on a world tour as a 1988 candidate for US president; informed the Emperor of his unannounced arrival; issued honorary World Passports to Sakharov, the mayors of Hiroshima, Nagasaki, and Tokyo; and thousands of the global document to Southeast Asians working illegally in Japan. Finally jailed by the Japanese Government, he was deported illegally back to the United States…where he was admitted on his own World Passport!

Spanning 40 years, beginning with the founding of the UN and ending with his world tour after the Berlin Wall breakdown, Davis covers individual sovereignty, how to become a world citizen, mundialization (communities declaring themselves global units), the World Syntegrity™ Project, the exciting new grassroots cybernetic process designed by the eminent cybernetician Stafford Beer to evolve a democratic world constitution, and the continuing, historical evolution of the World Government of World Citizens he founded in 1953 following the sensational events of 1948-50 when the movement began, recounted in his first two books, My Country Is the World and Passport to Freedom.

Make checks or MOs payable to